This was originally published in the UB School of Social Work magazine Mosaics, Spring 2015 issue

Those normally part of the bustling traffic of the UB Student Union were halted in their hurried tracks during a lunchtime last year by the presence of two shelter dogs at an exhibit table. They were, in a sense, manning an exhibit for an organization called Dog Tags Niagara with their human companions who were military veterans.

Jacob Silver, a junior in biomedical sciences, was among those who paused. A Marine Corps veteran himself carrying on his education after two tours in Afghanistan, he struck up a conversation with Mike, an Iraq war veteran dealing with transition and adjustment to civilian life, who proceeded to explain how Dog Tags turned his life around, and how it’s doing the same for fellow vets experiencing the after-effects of combat. The dogs looked as though they wanted to extol the benefits of the program as well. 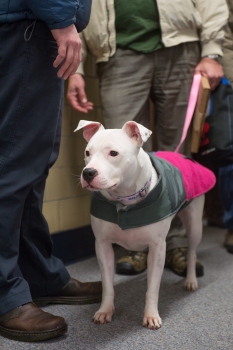 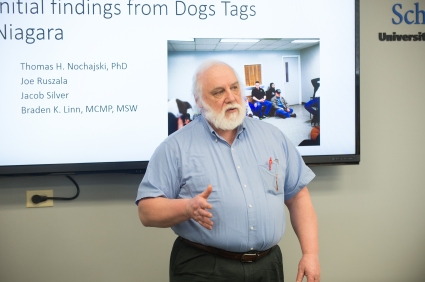 Nochajski felt that the research idea would be fitting for the Joining Forces-UB program, a collaborative project between the SSW and the UB School of Nursing aimed at training students to better care for veterans coming to them in a health care setting, whether for their mental or physical health.

“The other part of this is that we wanted to do research in the community with families and veterans outside of the Veterans Administration (VA) system because most of what you see about veterans tends to come from either VAs themselves or VA-sponsored research,” he relates. “We wanted to go outside of that because we know that the large portion of veterans don’t get their care from the VA. They go to private providers.”

As a wounded Marine Corps veteran of the Vietnam War, Nochajski knows combat. “But I also know that combat is an individual thing. The overall traumatic experience is the same, it’s how that gets interpreted by the individuals. That has a big role in this,” he explains. 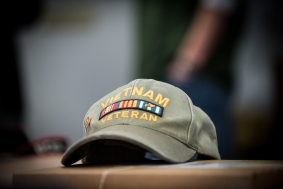 Joe Ruszala, an Army Vietnam veteran, helped launch the Dog Tags Niagara program at the Niagara County SPCA on Veterans Day 2013. Its mission is to heal the wounded soldier whose damages are unseen, and to heal the wounded animal whose trust has been broken. 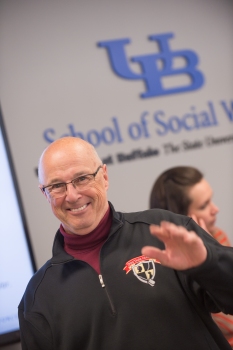 A passionate advocate of the program’s benefits, Ruszala indicates teh Dog Tags logo features a shield with a silhouette of a pit bull looking up to a silhouette of a soldier framed by a banner stating, “Freedom’s best friend to man’s best friend.” The pit bull, he acknowledges, has become the “throwaway dog” of today. The Niagara County shelter, like most others, is filled with the breed. He draws an analogy to how the veteran feels. “When they come home, they don’t fit. They identify with pit bulls because they’re going through the same darn thing, so there’s common ground there.”

The veterans work with the abused or abandoned dogs at the shelter, making regular visits with the intent of rehabilitating the dogs for adoption. In the process, they are helping themselves. Nochajski calls it a “two-way street of healing.” He is researching the effects of this project on both the veterans and dogs through a series of interviews with the participating veterans, SPCA staff, and those who have adopted the dogs. Silver is glad to be included in the research interviews, as is Brad Linn, doctoral student graduate research assistant. 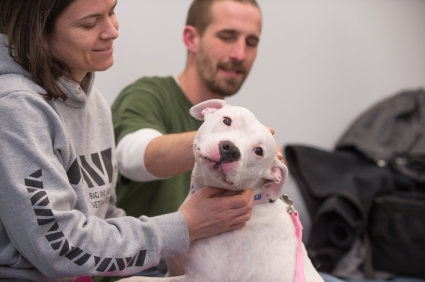 This is a low-pressure way for the veterans to connect with another living creature. If they’re having a bad day or feeling kind of blue, they’ll go to the SPCA and work with the dog. There’s something about that process that’s really helpful for the vet,” says Linn.

“A lot of these guys are struggling with their identity. They’re not in the service anymore, so they’re trying to find themselves again and incorporate their experience in the military into their identity.”

Nochajski indicates that the preliminary research results support what might be expected given the literature and research on pet therapy. 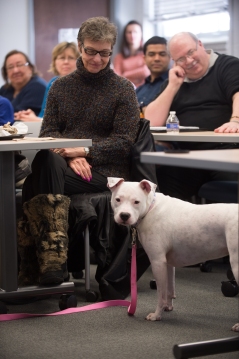 Jewell is attentive during the Joining Forces-UB Brown Bag Lunch. Jewell is a graduate of Dog Tags and a newly certified therapy dog. She stole the show!

“When the vets get the dogs, the vets are in a situation where they feel like they’ve been abused and tossed away. The dogs are in the same situation. So they can communicate,” he observes. 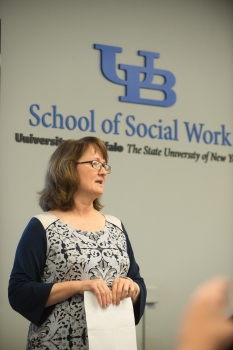 “By bringing a focus to veteran, service member and military family research at UB, we hope to bring together interested veteran students and others in the local veteran community to collaborate with first-rate researchers like Dr. Nochajski on research to benefit these populations.”

Ruszala happily has been seeing results firsthand as the vets help socialize the outcast dogs. “Not only does the dog begin to mend, we see the vets begin to heal too. What happens is that it gives the vets purpose and that addresses a lot of subjects. Veteran suicides are 22 a day. We know why that happens. If you don’t have a reason to get up in the morning, you won’t. But if you do, if you’re working with (dogs) Ripley, or Toro, or Bubba, and he expects you to be there on Friday, you’ll be there on Friday. That’s what gives these guys a direction to continue on, and gives them purpose to the point where they can get down into manageable levels and reengage.” 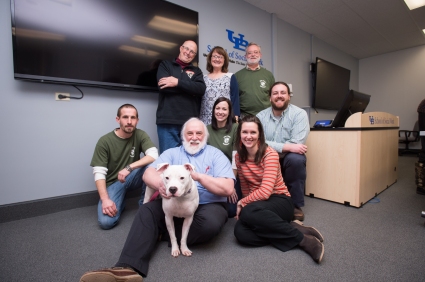